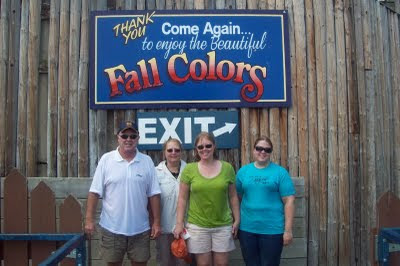 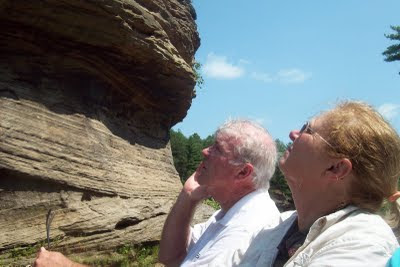 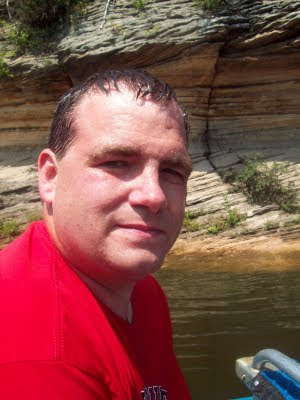 Mark wants a blog up date and I guess we have done a lot of things lately, just don't have pics.
One weekend we took the motor home up to Roger's house outside of Grayling and camped there. It was that one hot summer weekend this year. We went to the fish fry at the Silver Dollar Bar at Higgins Lake on Friday night. Saturday we played golf at the Grayling Country Club and Paul and I did great! We played best ball and beat Roger and Bev by 11 strokes. I had a great chip in for a birdie from about 30 feet, the ball went up in the air even and landed and rolled into the hole. Amazing! We had a campfire one night, watched golf and Tigers on TV in air conditioned comfort. And my allergies started, maybe from the tiny little dog or more likely from whatever is in the air this August because they are still dogging me. We were feeding our scraps to Priscilla's chickens last night and I started with the plugged up ears right away. Lots of weeds and plants out by the barn.
We so like to feed the chickens. We drive down on our golf cart and as soon as they hear us they come running for us. It is so funny to see a flock of chickens running at us. She has all sizes and colors.
Last Friday Linsday's called and invited us to pizza at their house. A spur of the moment deal, and lots of fun. And it was Pizzanello's Pizza! Very, very good and a blast from the past for Paul and I. When we moved to Mt. P. for college, newly married in 1969, ordering pizza from them was a Friday night treat. A small one was $2 and so good. Whole wheat crust, yum. We had never had delivery anything before, Mt. Pleasant was like a big city for us, there was cable TV and two movie houses! We also liked to eat at Falsetta's for their lasagne, it had ham in it, and their Italian and Ham subs. The first time we ate there was after the Homecoming game with John and Sally Sterly. We really didn't get out much at all. Mike and I won both games of Euchre too. I am not a great card player but we do make a good team for some reason.
Also during the last few weeks Paul went to the bone doctor, Dr. Weir, and is getting his other knee replaced. He was using a treadmill and it was the last straw for his cartilidge. Now it is bone on bone with lots of shavings. They wanted to do the surgery Jan 18. Nope, not here in January. Then it was May 18, ok, but a long time to wait. The next day he called for the surgery appointment, talked a bit, got put on hold and when the nurse came back to the phone there had been a cancellation on Oct. 1, did he want it? Oh yes, it works out perfect for us. He will have 6 weeks recovery, a few days deer hunting and we are on the road to Texas by Nov. 18.
And Paul has been spending a lot of time on the phone, internet and running around getting parts together for the GTO. He hoped to have it done by his class reunion in Sept, but it is looking doubtful. Monday we drove down to Milan, to Cyndi and Wyman's. Then he and Wyman drove to Flat Rock, down river Detroit area, and picked up some parts for the power steering. Cyndi and I and Sher went to a Coney Island across from Cabela's, the dogs were good but the coney cheese fries we to die for. And we might, in the end. Anyway, it was a fast trip, no traffic to speak of. No one is going to work in Michigan anymore!
Also posting some of Katie's pics from the Jet Boat ride in the Dells, Wisconsin. The most wettest fun ever!

Finally, an update. We'll try and come visit before the knee surgery.

We have been so boring lately ...