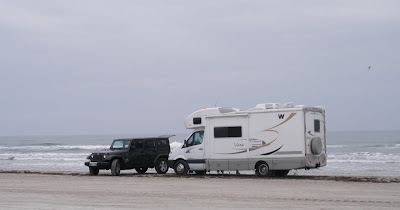 Brave campers, right next to the surf 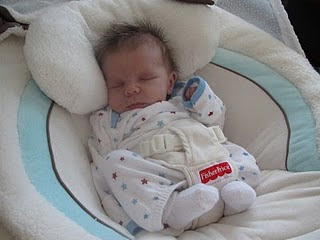 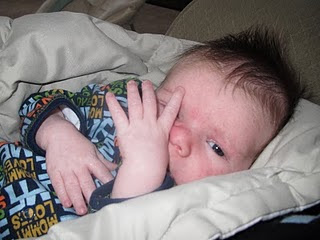 Look, he has eyes open, he looks like Mark

Last night we went to Cody's for dinner. I had all you can eat shrimp, excellent. Paul had chicken strips that were also great. We were talking at Bernie's to one of the best chef's in town, he said they can't beat Cody's prime rib for $15 on Thursday nights. And he sends his own friends there when the wait is too long at his restaurant.

I went to my first yoga class this morning. Got a donut, shopped. Tonight is Carlie's first basketball game, then Port A Rockers are playing at Bernie's. Lots of fun.

On Wednesday Paul went with a group of guy friends to the bar at the yacht club. It was nice and had great snacks. An old guy organized it, he had ten martinis in the the time that Paul was there, maybe two hours.
Posted by Marjie at 10:22 AM