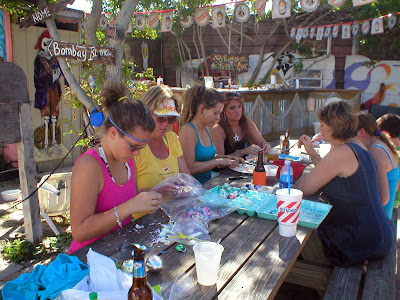 Carlie, Susan, Victoria, Heidi and Sandy on the other side of the table. 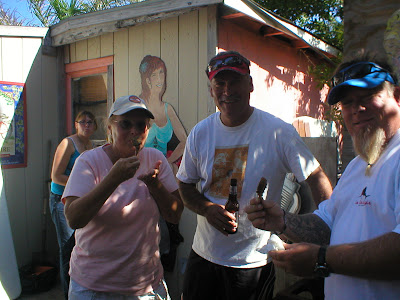 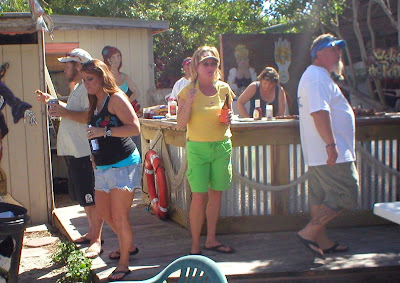 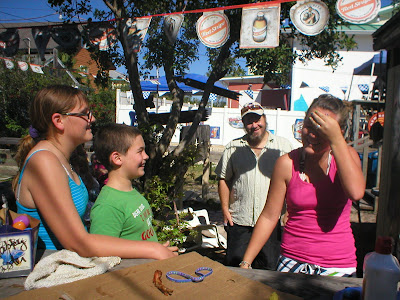 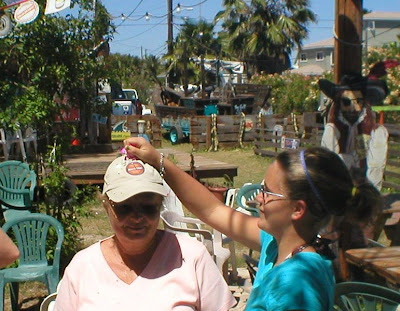 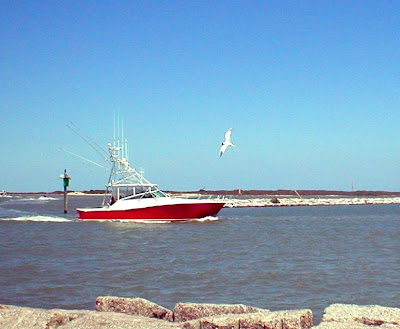 Our Easter started in the usual way, church at 9 am. Ward and Michelle gave us a lift as it was pretty damp, and did rain while we were in town. Thanks very much for the ride. By 12:30 the weather changed from cold and damp to hot and steamy. We drove to town in the golf cart, got burgers at Whataburger, and went to the park. Spent a lot of time trying to get a good pic of the sea turtle. Not much luck there. Very beautiful day on the water. Then Carlie called us about a cook out at the Gaff.

So off we go, and were greeted with confetti eggs, Cascarones. Pic of Carlie and I. She is so sneaky. The moms planned an Easter Egg hunt. There were 5 or 6 kids and 130 eggs. Victoria made baskets from beer six pack holders. Perfect for the bar egg hunt! Carlie found a special hard boiled egg and won $10 from Kip, on condition that she take a bite out of the egg and them smash the yoke into her forehead. She took the bait and doubled her money.

The food was wonderful. In the pic of me, Sean and Javiar we are eating tiny grilled lamb chops. Very excellent. There were also wonderfull ribs with Sandy's home made rub on them. Sausage, venison sausage and chicken. Cole slaw and kettle beans too.

After dinner, Victoria and Susan and Heidi made Shrimp Deviled Eggs for the Deviled Egg throw down at the Back Porch. Before they filled the egg whites with the yoke mixture, they put a shrimp in the white. Looked great. Victoria learned how to make them from her step-mother. Neither she nor Heidi like shrimp, but they love it in the deviled eggs. Hope they won!