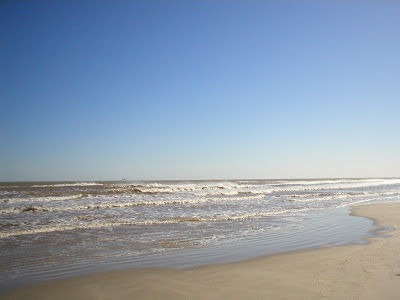 Hey from Port Aransas, Texas
I have been thinking of creating a blog for some time, but I have this fear of committment. Then I met Len, our neighbor at Pioneer RV Park, and his blog is very cool. Then Julie, my daughter, started a blog. And I found out it is free. The magic words. So now my friends can just check my blog if they are interested in my travels instead of being swamped by my long emails.

A little background music. Paul and I just celebrated 39 years of marriage. Retired and traveling in a motor home for 4 years. We have 4 grown up and successful, lovely, daughters, 3 handsome son-in-laws, and 5 superior grands. We live in the middle of Michigan, on a small lake. We winter in Texas on Mustang Island, just off of Corpus Christi. We love the beach.

Our claim to fame in Pioneer is we don't tow a car. We go everywhere in our motor home. Paul is a master driver. We go to the malls in Corpus Christi. He sits in the rig and does his newspaper puzzles. I shop. We go to the beach for the whole day. We have our own clean bathroom, cold beer, radio, a great view and lunch on demand. It is good. There is no place we can't find a parking spot.

When we get in after dark on a Saturday night and Ward and Michelle have a gathering of Texans on the corner, Paul just whips the rig around their golf carts as they cheer. He is good!

Beautiful sunny day in Port A. The wind was off shore and blowing off the tops of the waves. There is a new oil well going in, the three legged platform is in the background.
Posted by Marjie at 5:08 PM No comments:

Wednesday was our big trip to Mexico. It is a long trip, 3+ hours each way, through rural areas mostly. It is amazing how many rv parks there are in the middle of nothing. And they are full.

Anywho, as our friend Len told us, there are lots of armed Mexican soldiers and police on the border. Big military equipment in place, ready to shoot grenades or stink bombs or whatever is needed. There have been gun battles with drug dealers at several border towns on the Texas border in recent months. They looked ready.

We did a lot of walking. Parked and walked over the bridge. Progresso is said to be one of the better border towns. Streets were paved, dusty but clean. Very crowded. Like walking through any town during a street festival, but cars were still driving in and out and parked everywhere.

Shopping was interesting, cheap prices, fake leather goods -- Prada leather purses for $50, and Coach too. Much of the same products at every store. I had been warned about the beggers, and their babies and kids. It was easy to ignore them, especially since they were dressed nicely and were clean and well fed. Wanted to ask the kids "Why aren't you in school?" and by late afternoon I noticed several little girls in school uniforms ..... guess they worked the late shift. Most were selling trays of small mechanical bugs.

One of the guys bought several DVD's, I noticed they had The Bucket List, Juno, all the new ones. They were $5 each. The looked so homemade, the labels didn't even fit the disk.

I was good at bargaining with the sellers, as I really wasn't interested. It they lowered the prices enough that I couldn't pass it up, I bought.

Paul had good luck at the dentist. He practices in both Mexico and the US, so the standards are high. We will go back down in Feb. I got some of the Z Pack antibiotics that I take for sinus infections. We were with our friend Carolyn, a registered nurse, and she knows the ropes of drug shopping in Mexico and generic names, etc. The town is full of dentists and drug stores.

We went to Randy and Carolyn's favorite restaurant for lunch. It was pretty clean and full of senior citizens. Still scary for me. Had the Pancho, a nacho plate with fajita meat in it. It was tasty and we survivied. I know we have eaten at much dirtier places in the states, but Mexico spooks me.

Which leads you to wonder, why would we use a dentist in Mexico? We were convinced by all our friends that have had great luck down there. Having heard and seen stories from our friends finally convinced us.

So the adventure continues.
Posted by Marjie at 8:12 AM No comments: