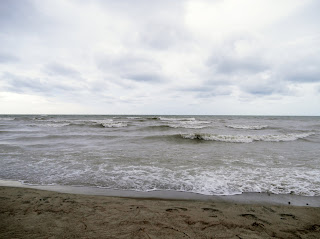 We are camping at Lakeport State Park, north of Port Huron, Michigan.  A lovely park right on the lake.  Just a short stroll  through tall climax forest, beautiful white pine and tamarack trees and hardwoods, to the sandy beach.  There are at least 4 other rigs in this section of the park, and we are here with old friends, Ed and Sheryl.  You expect parks to be uncrowded after Labor Day, but not empty.  But you don't expect 3 days of rain and wind either.

Yesterday we drove past the spot where the old family cottage was, on Wild Rose Lane, where all my best family memories are centered.  Grandpa Weeks and his sons built it in the early 1950s, cement blocks, two bedrooms, front porch with an old rusty glider.  And a big beautiful beach with wonderful sand and friendly neighbors.  Every holiday and Sunday the whole family would come up for the day, and there was a weekly rotation of families staying, we each got 3 or 4 weeks a year. 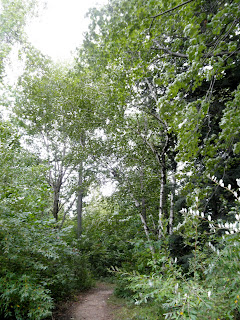 It was expecially exciting for me when my lake friend Lisa Schmaucher from St. Louis, Mo was visiting her Nana for vacation.  They were a large strict Catholic family, every morning I could see them all dressed up heading for 6 a.m. mass.  So exotic for a small town Congregational girl.  Church every day!  Lisa's Shafer cousins were all promised to the church, Bob as a priest, Mary as a nun, and Bill. the deaf son, as a brother.  Not sure how that turned out, but their mother became a cloistered sister as soon as the kids were on their own.  All such nice people, sad to have lost touch with them all.  Their cottage is still there, had a small addition.  The Weeks cottage is replaced by a huge red brick McMansion that takes up the whole lot, all the wonderful virgin woods and trees are gone.  My mother's cousins lived across the street, Greenburg's might have been the name.  He invented the building toys, Crazy Ikes, and gave us a kid when we were kids.

So we did a nostalgic tour of Port Huron, stopped at the Edison Park along the St. Clair River, took pictures in the wind and the rain.  Drove past the old Sperry's store, and the wonderful little restaurant, Diana's, both long closed, but full of wonderful memories.  My mom always told about the time Jerry was two and Dave was four and they were on the second floor of Sperry's, shopping for winter jackets for the boys, someone screamed "There is a little girl out on the window ledge!"  It was Jerry with his long blonde curls.  The stories she told about the boys, hair raising. 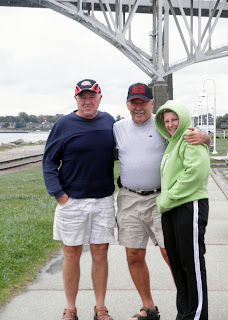 Paul, Ed and Sheryl and the Blue Water Bridge to Sarnia, Ontatio

We had a great day with Ed and Sheryl.  Had lunch at a legendary Irish Pub in Lakeport, watching the Tigers game.  Talking to the guys at the next table, we found out where the Moose and Eagel's Clubs were in Port Huron.  Finished watching the game at the very nice Moose Club on the St. Clair River.  Saw many freighters on the river, too dismal and rainy to get a decent picture.  Then we went to the brand new Eagle's Club.  A great afternoon, nothing quite so thrifty as drinking and watching the Tigers in a club. 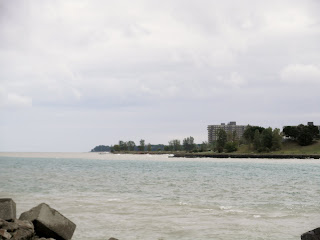 Lake Huron pouring into the St. Clair River at Port Huron and Sarnia

We had a late dinner at Olive Garden, and my fridge is full of white boxes.  We had as much fun as is humanly possible on a rainy day at the lake.  Which turns out to be quite a lot of fun.

Lake Huron is salt free, shark free and oil free, I am trying to be sugar free.