The Eagle Has Food 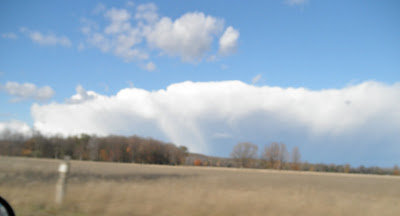 This is a picture of a cloud that has a white streak that looked like a water fall going down it Lots better to see it in person.


We got to Boyne Mountain on Friday with a couple of stops in handy nearby Eagle's Clubs. It was raining hard on the trip north, we had to stop at the Eagle's in Gaylord. Roger and Beverly were waiting there for us. Being Friday, they served an amazing fish dinner. Roger got the buffet and fed us all shrimp cocktail and mac and cheese. Paul got fried shrimp and Bev and I got cod. Roger ate Walleye, but could have any of the fish. Sadly, you can only eat so much fish.

Next, we went to the Boyne City Eagle's Club, it was very crowded. Finally, we went to the condos. On Saturday, Paul made a great breakfast, and we went to the Eagles in Boyne to watch the Michigan State/Michigan game. Bev and Roger brought snacks and the club had chicken wings and cake, and others brought food too. Wings were excellent. Around 1 pm, Steff and Tyson got there, and then their friends.

After that game, we drove up to Petosky to the Eagle's Club there, right on the bay. They were having a very loud party after the game, the DJ was deafening, but good music. And guess what? More great food. I was full of junk already, so I just had some veggies and dip, and a few bites of Paul's brat. It was good. The bay was very wild, six foot waves and the water flying way up in the air, beautiful with the shades of blue and white caps. Went back to the condo to watch the Tigers lose.

Oh,we threw away some money at the casino, and with pull cards, and raffle tickets. Not a very lucky weekend. I think some loser lotto tickets also. Pathetic.

Sunday, we had breakfast out, went to Petosky and shopped a little, went on to the Eagles Club in Indian River to watch the Lion's lose. Then to the Boyne River Inn for some wonderful white fish. The only luck this weekend went to a fisherman who caught a 10 pound steel head trout while we were eating dinner, overlooking the river. Then to the Eagle's Club in Boyne City again. By this time I was over my limit of time I can spend good naturedly in bars. I talked Bev out of that third shot of Jagermeister, we all said good by to our new best friend, Larry, and got home, safely.

Home again, home again, like a fat pig
Posted by Marjie at 7:09 PM