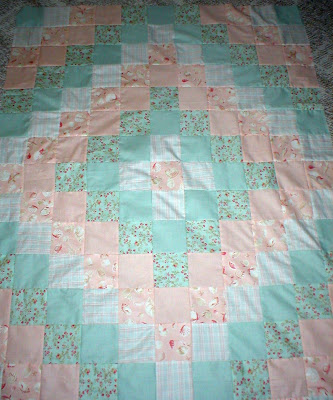 Yes just a mixtue of this and that to end the week. I have been working hard on Baby Girl Keenan's baby quilt. It is lap sized with two borders and a ruffle around it. Going to work on the borders and ruffle this coming rainy weekend. It has come together without much ripping of seams.
My sister, Mary, is making the Around The World quilt for her grandson also. Her first, it is a fun sister project.
Last night Paul and I went to dinner to Buck's Run, alone. Kind of a date night. It was fun to get out of shorts and jeans for an evening. Paul had a burger and I had the lake perch. Very good as usual.
Another cool week up here in Michigan. I had the space heater on this morning early while I was on the computer. It was 65 degrees in the house and 54 outside. Raining now, damp makes it feel more chilly.
A couple of weeks ago Otis called Paul from Port Aransas. It was still beyond hot there. No rain yet. Usually, the beach is easily drivable for all vehicles. Now it is so dry that the sand is all fluffy and light. A friend of his earned $12,000 in one weekend from towing people off the beach. On weekends the ferry line is hours long and the bridge is all backed up too. Everyone wants to get to the ocean. Earlier in the summer Javiar said the heat is unbearable. He grew up in south San Antonio with no air conditioning. Can't imagine how bad that must be.
Rick and Sandy drove down from Houghton Lake on Tuesday. They have a show pickup and drove it. Very nice, purple with Tweety Bird details. He is still tweaking things, put in a new motor recently. Sandy had some medical problems, maybe a stroke or maybe from a strep infection, with a lot of side effects. Happily, she is back to her old self, whom I like very much, we had a good time talking. They are very good folks.
Our GTO restoration project is slowing down. Waiting for parts, Kevin was sick, blah blah. I was going to paint something on the frame today but it is too damp out. Paul can't paint it with his knee messed up.
Posted by Marjie at 9:19 AM