Top is a lovely pic of the Gaff's new pirate ship. The Frayed Knot. 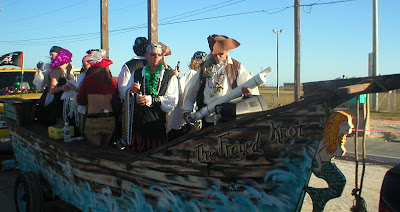 I am sitting in the pickup pulling the ship in the next pic, ready to throw beads.

Then we have me, Susan and a jello shot.

Bottom is Susan, Carlie and Javiar. 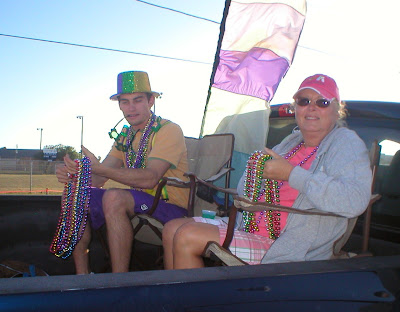 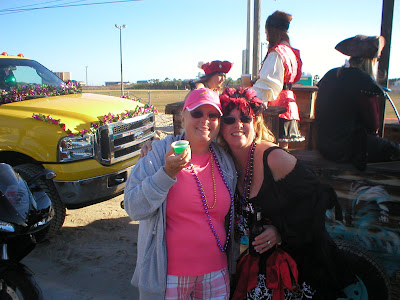 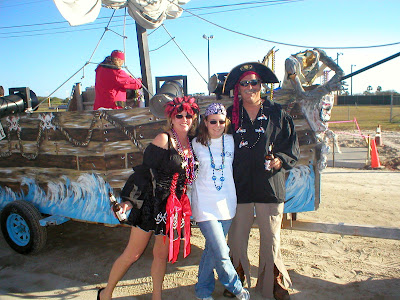 We had three golf carts driving down the beach for the Mardi Gras Parade on Tuesday. It was a very beautiful day, sunny and 80 degrees, not too windy. First we went to Bernie's and they were giving out free shots of something, kind of sour, maybe Hurricanes. Or what goes in them? Then everyone wanted to go to the Gaff, where the parade started. I am thinking this is not a great idea, we have too many friends there and they will want us to get in the parade. Sure enough, first thing Javiar says is "ride in my truck with me," it was pulling the pirate ship. We had to say no, we wanted to see the parade and not lose our group. Then Susan taught me how to do jello shots. Then this guy says he has an empty seat in the back of this pickup. It sounded like a great idea to me! And it was so much fun. Throwing beads is a riot. And what a surprise for our group when I threw beads at them!

They didn't have a beer bong. That will be on the beach for spring break!