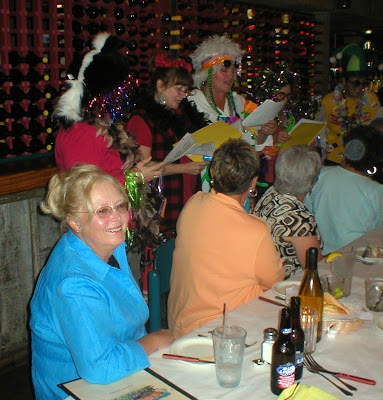 I added a picture of me since I am usually the photographer, and I was dressed up. Behind me are ladies that were singing for the happy couple.
Below is the singers with Buck and Verlene, in light blue, and her sister Dee.
Way down they are with the old Elvis. 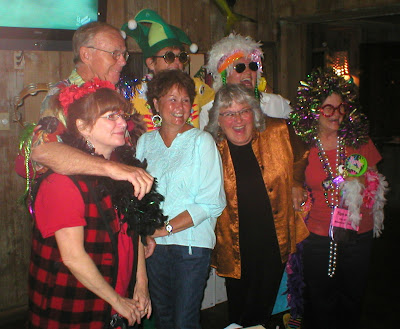 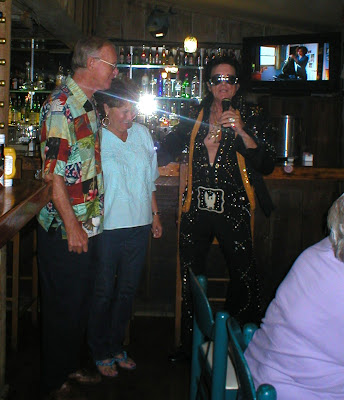 We were invited to join a group of our friends at Pelican Landing for an anniversary party last night. And it was the last night that Elvis was entertaining there this winter. We play games with this group, the men, and Mavis, play poker. The wives play Mexican Train dominoes or Jokers (cards, marbles and a wooden piece that the marbles travel around.) Good games. Very fun after I get the hang of it.
Shirley, Dee and Virlene are sisters, raised in North Dakota, and they all come down here in the winter. They are very fun and nice. I could not believe that Virlene and Buck had been married 46 years, she hardly looks 46. But she was runner up in the Miss North Dakota contest, way back when. Her sisters say she and Buck were crazy when they were young, they would do anything. Yes, she was the youngest. Buck and his best friend, who was there too, used to pick fights in bars just for fun. He had a cerebral hemorrhage five years ago and doctors said he'd never walk again. He is doing pretty well, walks fine, talks fine, a totally different personality, and he gets lost easy. Can't ever be alone. Their son played football for the Falcons. We meet the most interesting folks here.
So the party was fun. The food was excellent. I had shrimp and pasta with 3 cheese sauce, and baked. Paul had beef terracki, which was filet in a nice sauce. Elvis was in the other room, but he sang ok. He walked in to see the happy couple. He was pretty old and scary looking. I have one pic.

You look so cute!

Thanks, I cleaned up pretty good that day.