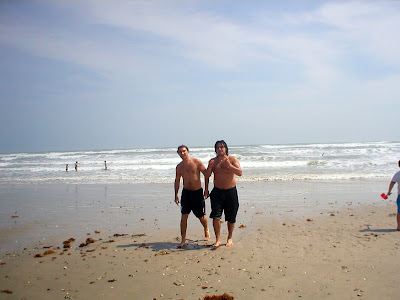 Beach pic of Dan and Gabe on Sun.
The guys rocked at their last gig Tuesday evening. After nearly two weeks in Port A they have accumulated a lot of fans and friends. They sang two Port A songs they had been working on, one with a real island flavor. They spent Monday fishing with Dan at his condo and eating and drinking very bad margaritas, had a ball and relaxed. Sean at Island Cycle/Lug Nuts checked over their van and changed the oil for them. He wouldn't take their money, just wanted a couple of CDs. They also had been jamming (a grad class in guitar) with an island guy, Jack, who is a great guitar man. He played and sang with them for one song. And Chris, a high school student, played guitar with them for a song. Just a big island love fest. Huge crowd for a Tuesday night.

Gabe told us they need to leave and sober up and become professional again. Off to New York City. They are very passionate about the music. Oh, funny story. Paul was telling Sean that the band was coming back in June and had some gigs lined up already. The owner of the Salty Dog was standing nearby, listening. He heard about three songs and came up to Paul and said "I want to book your band when they come bad in June." He thought Paul was the manager. He directed him to the web site. Since Paul had on a dark golf shirt, he thought he was a city boy.

Sorry to all the folks that I told the band was playing at the Tarpon Inn, it was the Tarpon Ice House. Which we had never heard of. I thought I had seen the worst that Port A had to offer, oh I was so mistaken. It is right on the main street and we would have been lost if Paul hadn't noticed a small sign out saying "Band Tonight." I guess we could have heard them if the window was open. Hard to imagine being lost in such a tiny town.

Many businesses on the Island have a fish name or beach theme, and the condos ... get some creativity, they just all run together in my head. Hard to keep them straight. Then the street names, letters -- Avenue C --- or numbers 11th Street. Beach Street is my favorite. So we are pretty easy to surprise. I recognize the souvenir shops by the large plastic creature out front, the shark or the octopus or whatever.

Although modest, and rightly so, the Tarpon Ice House had a stage out back in the patio. Imagine that you lived next to the dump and built yourself a house and patio area and got the building materials and furnished it for free! That is the ice house. There were maybe four real table and chair sets in various stages of decay. We sat behind a nice granite bar on rusted bar stools with rotted out netting. One had an old pillow on the seat so your butt cheeks didn't stick out the bottom. Lots of old rusted lawn furniture and kitchen chairs for the audience. The pool room had half cement with chipped paint and half wood laminate floor. But it all looked clean. Cold beer. The owner was happy to see it full of townies drinking beer.

They played until almost 11 pm, and then we headed out for the moon fire. A townie tradition, a beach bonfire on the full moon. Either everyone was at the bar or it was over with. So we headed home. I spent the day shopping with Merna in Corpus. Very fun and good deals!