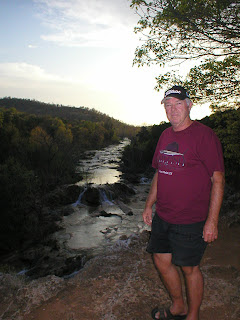 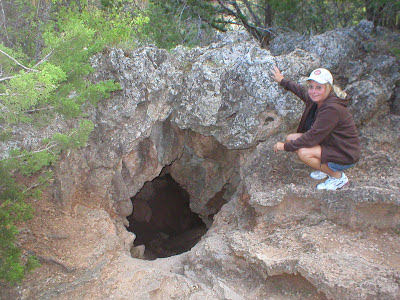 We got an early start this morning, on the road by 7:30 am. James suggested a new route north, going up the middle of Texas taking 181 to 80, to 183. We missed a turn and went through Austin instead of around, but the traffic was light so no matter. It cut a lot of time off the trip, an hour plus, and the roads were good, the scenery pretty. We got to Fort Worth at 3 pm and missed the heavy traffic.
Now we are camped at Turner Falls Park in OK. We hiked to see the falls and caves. It is pretty and just as safe as the Grand Canyon. You know how that is, a pipe railing about 3 ft high, or no railing at all. Then Paul grilled us a steak, we drank a beer or two. It is still in the mid 70s after a nice red sunset. Paul is watching NCAA finals, and apparently we have a thunder storm warning. The tornado watch is west of us. Looks much too pretty here to storm.
More foodie update: we ate at Trout Street on the harbor on Sunday with Carlie, Susan and Javier. I had fresh grilled tuna salad on toasted yummy (and currently nameless) bread. It was delicious and my first grilled tuna ever. Paul had a wrap with turkey, monterey jack cheese and bacon. Very good. And feeling very Texan, I had a gas station breakfast burrito on the way out of town today. I can’t stress enough how risky that is.
I took some wild flower photos out of the window as we whipped by. Turned out ok. Also pics of here at turner falls.
Posted by Marjie at 8:45 PM