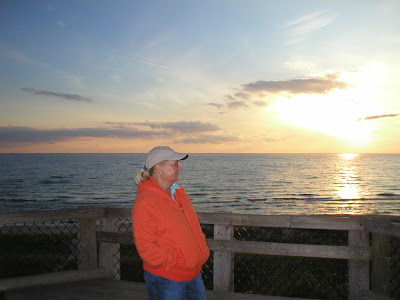 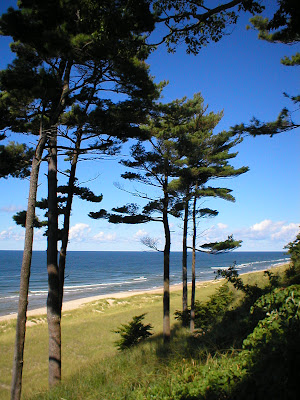 Left for South Bend, Indiana, last Friday a.m. Parked the motor home in front of Andrea and Ryan's house for the weekend. Played with Charlie and Julia, ate Andrea's wonderful white chili. Paul and Ryan went to the Notre Dame game on Saturday. I knew it would be too hot and long for me. They had a great time. Ryan had friends tail gating before the game, and they took a city bus instead of driving and finding a lot. Less stress all around.

Andrea wasn't feeling well on Saturday, but we still took the kids to the new park. It is awesome, the ground is all covered with a spongy, rubber like carpet, painted nice, not that shredded black stuff that rubs off on clothes and hands. The equipment is handicapped accessible, with ramps and toys around the big structure as well. I didn't get any pictures, was too busy chasing kids. It was very nice, it is near the zoo.

Andrea felt better on Sunday and we did some power shopping, found cute kids clothes and a few things for myself too. South Bend has a nice shopping area in the south, south of the river and north of the bypass road. Lunch at Panera.

Paul found a campground on the Internet that was on Lake Michigan, just north of Muskegon. So about 3 pm, we headed north and found the county park by 7, with a stop for groceries. And another for beer. West Michigan is very Dutch Reformed Church, and they have blue laws in some places, no alcohol sales on Sunday. Turns out no alcohol is allowed in this county park, which is why the Catholics invented big sippy cups. No hassle anyway, it was full of quiet, polite old Yankees, who just ignore everyone else. No one saying "hi" except us and William and Mary Ann. They just camped down the way from us. They had a Harley, a small trailer, tent, screen room, table and chairs. They were master packers to fit it all in the trailer. Very impressive. We had campfire with them one night. Very nice people, from Ferndale, MI.

Anyway, Paul chose this park because it had 2,000 feet of clean and sandy beach. And it sure did. It also had huge campsites, mature trees, clean restrooms, three decks overlooking the lake from the top of the dunes. We can't decide how high, probably 40 to 60 feet, maybe higher, people looked real small by the shore. I will post pictures and you can decide. It was beautiful, and cheap! Very middle class, we had the best rig there, that has never happened before.

We had a rainy day, and some perfect sunny beach days with long walks on the shore. Just before we got there they had a big storm and the lake temp dropped from 77 degrees to 55 degrees. It got warmer as the days went by and Paul did get in swimming. The sun was really, really hot.

We planned on staying and attending the Irish Music Festival in Muskegon this weekend but the weather coming in was all rain. Time to give up on that notion.
Posted by Marjie at 6:52 AM