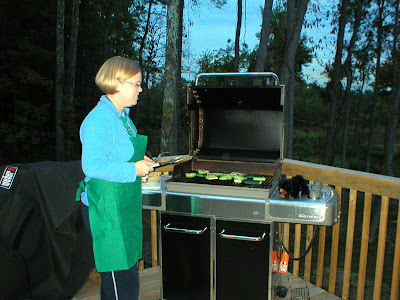 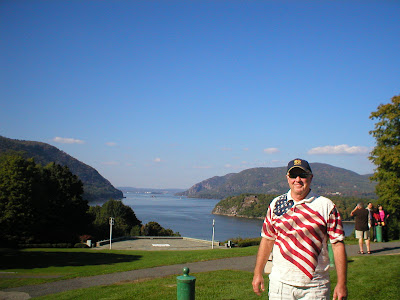 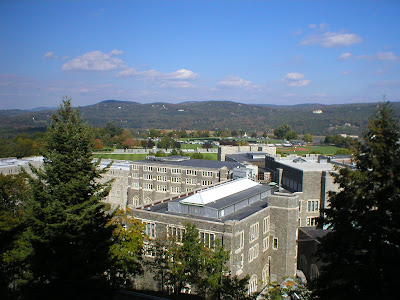 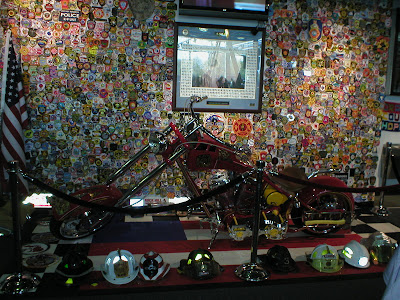 On Thursday, we did some touring in this area, and drove through Newburg to OCC, Orange County Choppers, of the reality biker show. It was a huge and beautiful new building. We picked out tees for our biker pals, Roger and Lance. There were quite a few bikes displayed and they were pretty and shiney. QVC was there setting up for selling stuff on TV. I have a pic of the bike made to honor the firefighters and police killed in the 911 attacks. There was so much color/clutter in the background it will be hard to distinguish it, still I am putting it online.

Then we headed south on 9W to West Point. We took a tour of the post, it was so beauiful. When things change, like they don't need stables for the calvary anymore, instead of tearing down the beautiful stone buildings, they just redo the inside for new use. And the view of the Hudson was awsome. It is so wide and deep, and surrounded by hills.

So now the geek part of the story. We took a 3 hour tour at Gettysburg and noticed there were people who thought they knew more than the guide, and kept interrupting. Our guide at Gettysburg had been doing this job, his obsession really, for 25 years. Same goes for West Point. IF these annoying folks had been military, they wouldn't interrupt, if they were retired military, they could have gotten on post easily enough. As it was, they sucked up precious minutes of our tour. I have posted a photo overlooking the dorms from the chapel. Also one of the view by the Hudson River.

On Wednesday, Katie got off work early and we had lunch at a favorite spot, and then we drove to Connecticut to grocery shop at Stew Leonard's, a very unique store. It was not so much canned goods but excellent meats, dairy (they own their own cows/farm) vegetables and fruits, baked goods. And you only go one way in this store, like a maze. It makes it easier to shop and you don't miss anything. Plus snack stations, like a buffet only the people move. A moveable feast!

Thursday night we ate at the Raccoon Bar nearby. They are famous for their hamburgers, so we ate burgers and sweet potato fries. Katie and I split a crab cake appetizer too. Excellent, with a mango salsa. I think they should be famous for the view, we were hanging over a cliff with a great view of the Hudson and just below a waterfalls and pond.

how about some Smokey pictures!